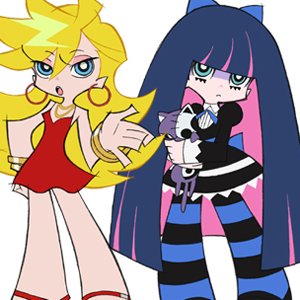 The main heroines are some kind of fallen angels who fight against ghosts in Daten City. They power up when they strip themselves. As you can guess, Panty takes off her panties and Stocking takes off her strip stockings. We are lucky, the guy called Garterbelt doesn’t take part in this stripping. Panty is a girl addicted to sex, and Stocking is addicted to candies. They have a dog called Chuck.